Difference between revisions of "Modoc"

Modoc was built on the edge of the former Modoc National Forest, and is one of the secondary towns of Fallout 2. For a long time, Modoc's community has been surviving trading meat and brahmin hides (the city is featuring an impressive slaughterhouse), but now other cities have begun to sell the same stuff at cheaper prices. Nowadays Modoc is beginning to be mostly a trade city, thanks to its armorer Balthas, its location on the route to Vault City or The Den, and the Bed and Breakfast that gives a warm welcome to travelers. 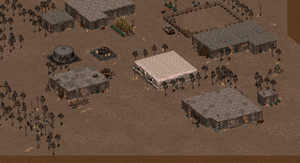 The main entrance of Modoc, a place where a lot of people died without mercy!

Despite being of less importance in the original Fallout 2 game, Modoc is a big city in FOnline: Reloaded. It attracts many fighters because it is one of the few cities that is not guarded in the northern part of the worldmap. It is also a city where no reputation is needed (when the slavers of Den may attack you or Gecko's ghouls).