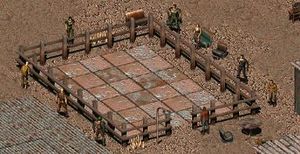 Players can fight in boxing rings. The items in their inventory will be temporarily held like at Hinkley, including weapons and armor. Thus all boxing ring matches are done totally unarmed. You enter the ring by placing your bet of at least 1 cap with the ring manager outside its gate, but bets can be much higher than 1 cap. Both players slug it out in the ring until one is ruled the winner, at which time they both automatically exit the ring. Both players will have their items restored and the winner will have all of the caps from the bet.

If players watching the fight wish to place their own bets, they can do so but it's up to them to manage such private transactions outside the ring.