Deterioration is a statistic that modifies the efficiency of weapons and armor. When a weapon is used, it deteriorates, and when you wear an armor and you are shot, your armor deteriorates too. When a weapon is deteriorated, the wielder is more likely to suffer a critical failure. (Weapons that stack do not deteriorate.) More deteriorated armor has a higher chance to allow incoming damage to "bypass" it, and a broken armor doesn't block anything. 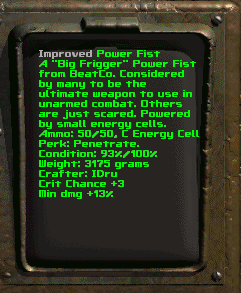 An item's condition is shown as a percentage, up to 100%, so Deterioration is the inverse; the lower number means more deteriorated weapon or armor. 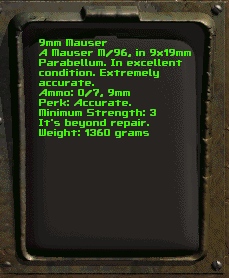 An item that reaches 0% condition (100% Deterioration) is broken, and its description will say "It's beyond repair".

Broken weapons can be held in an active slot and thus brandished, but will no longer function as working weapons for combat purposes.

Broken armors can be worn though they no longer offer any protection, but don't throw them out too quickly! Their bonuses still work; prefix stats are applied even when armor is broken. So armor with +1 Charisma, still gives you +1 to Charisma even once the armor is broken.

You can improve the condition (decrease deterioration) with a successful Repair attempt on a weapon or armor. Use your Repair skill for this, but for best results, arm a repair tool in Slot 1. The Super Tool Kit is the best for this. Low skill will usually result in a failed Repair attempt, which immediately degrades the item's condition (makes deterioration higher).

Condition is shown as a fraction, and all of this above is about the numerator (first percentage) in the fraction, but what about the denominator? 50/100 means the armor is in bad condition at the moment for protecting you against incoming damage, but it's overall condition is brand new, so if you can score a "perfect repair" on it, you might restore it to 100/100 which is as good as it gets. 100/100 is the condition of fresh-crafted armor, which is why many players prefer to craft new gear.