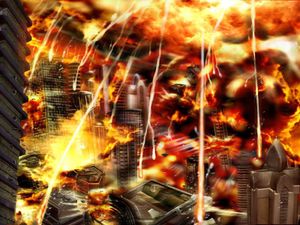 Fireworks celebrating the beginning of the war. Quite deadly fireworks, by the way.

The Great War started (and ended) on October 23, 2077 when nuclear weapons were launched by all of the nuclear-capable nations of the world, including primarily the United States, China and the USSR. The war lasted for two hours, until the last atomic bomb fell. Then, the world fell into darkness.

Fortunately, some of United States inhabitants were able to survive the nuclear holocaust by sheltering into big survival vaults made by Vault-Tec, like Vault 8, Vault 12, Vault 13, Vault 15, and possibly Vault 4. Those Vaults opened years later, letting the refugees expand into the wasteland, a Radiated and sterile earth.