Vault 15 is one of the many underground survival facilities built by Vault-Tec, like Vault 13.

A manhole inside this hut leads to the rat-infested entrance of the vault, which is inhabited by Slags.

Long ago, the situation in Vault 15 led to a schism, and all the inhabitants split into four groups. The Jackals, the Vipers and the Khans turned into raiders that only wanted to kill everyone in the wasteland, but the fourth group founded Shady Sands that would later become the great and powerful capitol of NCR.

The four groups left this vault behind, and it is now populated with hostile Slags, leftover raider types from the old days.

In total, there are four computers inside that yield Electronic Parts if you use Science on them. There are two sub-levels with Lockers and two wall safes, all of which contain loot. Some of the loot is interesting and has combat value, well-worth the risks.

You can also find a working Medical Terminal inside Vault 15, for Crafting Drugs. 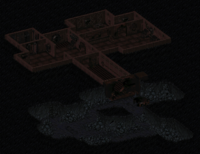 The dark and rusty entrance of Vault 15, with its door exploded from the interior.