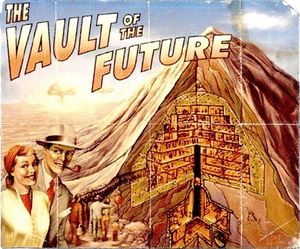 Vault-Tec proudly presents : The Vault of the future...

Vault 13 is one of the major fallout vaults developed by Vault-Tec. It is the Vault Dweller's home from Fallout 1. It is probably located right under Mount Whitney, as it matches quite exactly the mount's location. 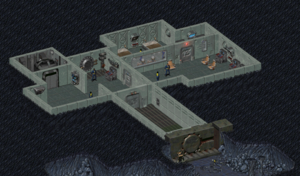 The entrance of Vault 13 as seen in the original Fallout 1.

The vault's construction started in August 2063 and ended in march 2069. Meant to stay closed for ten years, the vault was also containing 1000 inhabitants, protecting them from radiation of Atomic bombs from the Great War. However, as a study about prolonged isolation, the Vault remained sealed for 200 years, which would eventually lead to problems with its Water Chip.

You cannot apparently go inside this particular Vault in FOnline: Reloaded. You can go inside the cave, but the giant Vault door is sealed. The Vault's door remains closed after the Vault Dweller was expelled.