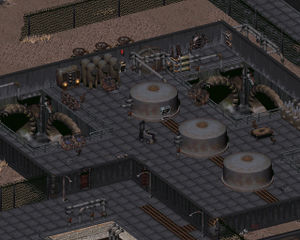 Waterworks is an old pre-war facility which generated the electric power for the cities nearby before the Great War.

The facility is located near the west coast, southwest of Lost Hills Bunker, mostly west of Hub. The facility consists of huge tanks where water is stored. Next to them, there is a bigger building which contains the machines and the main reactor to generate electric power. Other buildings contain offices and basic equipment. The entire facility is offline, and it's function as a water storage plant, and as a source of electrical power for the region, is currently non-functional. It serves now as a resource-gathering site.

Waterworks is located at Grid 19:41 (south western area, near but not on the coast).