From FOnline: Reloaded Wiki
(Redirected from Hub)
Jump to navigation Jump to search 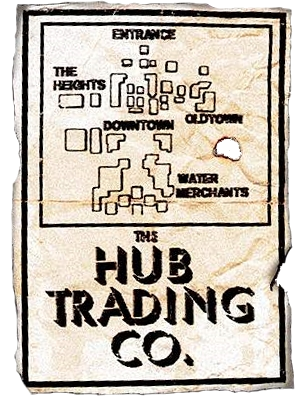 The Hub's sign, describing the town as a major trading city... A hub.

Just like in the original Fallout game, The Hub is a major city. In FOnline: Reloaded, several traders, banking services and Quests are turning this town into a valuable alternative to the huge Shady Sands, the capital of the New California Republic which also includes Hub. Due to Hub's close proximity to new Characters' Starting Location, Hub often has a lot of player traffic. It has NPC Merchants for Bartering goods. It is a guarded town and PvP is disabled, so it is the place where a lot of people gather.

The Hub was originally created by a man named Angus, that later became the first governor of that growing city. Thanks to Harold's caravans, The Hub started to grow and attract a lot of citizens. Later came a war with the water merchants, that were demanding a toll for anyone wanting water in the city. After an agreement, the Hub's council was made, and the town became ruled by several policemen. It is a lawful town that will later be a part of the New California Republic - after the year 2238. The Hub also hosted the impressive "Hub Roleplay Project".

Despite a huge police force sometimes assisted by NCR backup, The Hub is unknowingly hosting the Thieves Guild, a faction that was once led by RP players. The Hub Underground, that seeks to control the Hub and its massive trading profits, is hosted in a basement under the Maltese Falcon bar, but seems quite peaceful or in hiding. (The Steal skill has been disabled in Hub.)

The Hub's police leader is Sheriff Hayden. Captain Joe Kelly is assigned to the north beat in Hub. Deputy Feral is a man commonly known to patrol in The Hub in person. He suspects the Maltese Falcon to host the Hub Underground, but isn't able to do something about it by himself. He is on very good terms with Sheriff Dumont at Shady Sands. Deputy Feral is leading a Militia-style police force which is mostly made up of normal citizens who have only light training. They are tough though, and make up for their lack of training with good Weapons and Armor.

The The Vault's article about The Hub

The Hub is located at Grid 31:40 (central southern area).