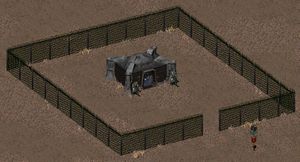 The base's entrance. Don't get too close of the door or the guards will shoot you. Quickly talk to the guard on the left instead !

This level hosts the training chamber for the Brotherhood knights, and also the storage room, where all the Brotherhood's technology is located. There is also the guards room, where surface guards spend their time. The elevator to go to the other levels is located in the south-west of this level.

This level hosts the living quarters for initiates, their classroom, and the base's medical lab. Surgeries are performed here, since the Brotherhood's doctors spend their time in the infirmary, supplied with heavy medical technology. The new members also learn how to become a Knight or a Scribe here.

This level hosts the Scribes and the Knights. They both live and work here, the Scribes in the library full of computers, and the Knights in the workshop. There, you can learn some professions levels (In the eastern room). This is also the place where the new Brotherhood's technology gets invented and reproduced. 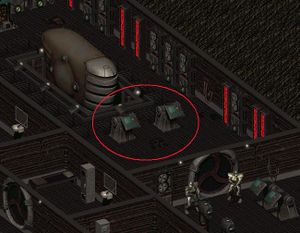 The computers to use to resign from the Brotherhood of Steel faction.

This level hosts the command center, the true Brotherhood's headquarters. The Elders live here. Each one has his own quarters in this level, and they usually spend their time in the conference room or the auditorium, sometimes full of Knights awaiting their briefing. In this heavily guarded level the Brotherhood's data is also located, stored in computers. This is the level where you can resign from the Brotherhood of Steel faction.