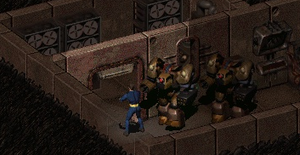 A radioactive cave inhabited by Geckos.

Once a secret underground military complex, the infamous Toxic Caves were abandoned by the army centuries ago. Now populated with geckos, and guarded by hulking Sentrybots, it is a source of Chemical Components alternate to Waterworks.

Electronic Parts can also be obtained here, but the big attraction for most visitors is the Advanced Workbench, necessary for advanced Crafting.

Be advised, all those delving inside the Toxic Caves will be subject to life-threatening Poison gas, the element of its hostile air quality on which its name is surely based.

NOTE: After killing one of the robots guarding the Advanced Workbench, you may be able to loot a minigun off its remains.

NOTE: Klamath Toxic Caves are hidden by default, and thus not visible on the world map until you speak with Meloy, a trapper that can be found in Klamath.