NOTE: You can disassemble a radio by using the Science skill on it.

Radios are the only in-game way for characters to communicate with each other when they are in different locations. An unlimited number of players can share one radio channel. Before "OBT 3" in August, 2009, a lot of teams were not using voice chat software (such as Mumble, Teamspeak or Ventrilo) and were then using the radio quite often. Even now, radios are still used by a lot of players and teams along with voice chat software and Discord.

"USE" a radio to open its interface, and adjust its settings. The default channel will be zero, and transmit (broadcast) might be enabled, but you'll have to enable reception. 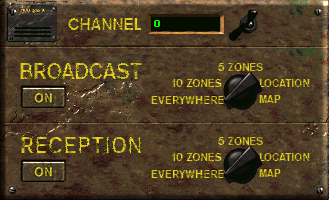 In the radio settings menu, you can change the channel, and adjust the range at which your radio is able to transmit and receive messages. You can also disable transmitting and receiving functions independently.

The channels numbers can be set between 0 and 65536. They are not secured, so if you know the channel number used by another player you can tune in and listen easily, though the chances of that happening randomly are extremely low.

Radios found in random encounters will be set to channel 0, and have their reception turned off, but transmission turned on. So when you find a radio, you should always check to see if you're transmitting on it and adjust it accordingly.

Speaking with a Radio

Once you and your friends are tuned to the same channel, you can talk to them by writing in the chat bar and holding down Shift when you press Enter. Or you can use a prefix /r (/r message to radio) and press Enter. Your sentence will be redirected to radio and not displayed in the general chat. However, speaking in the radio will make you whisper while sending your message in the radio channel. You won't whisper if you only receive a radio message.

To be able to speak on a radio, you must have it in turned on and in your inventory or one of your hands.

Radio messages are not signed, which means their authors have to say who they are, if they want to be clearly understood. This means that you can also perform an identity theft by saying you are someone that you are not really. By then, some gangs will use codenames or identity password, which means you can only trust a radio message if it is followed by a specific number sequence.

While you're in an encounter, and with a radio in one of your hands (weapon slots), you can use /h (help, works on Latin keyboard layouts) or /p (privet/pomoshch, works on Russian keyboard layouts) prefix for your messages (.h and .p works as well) to send a distress signal.

All the Characters connected to your radio channel with a radio in their hand will be able to see your location on the world map, if you are in a random encounter. A red circle will appear on their world map, though you might need to tell them what Zone you're in since it's a big map.

NOTE: In order to send/receive a distress signal, both parties need to have a radio in hand (in a weapon slot), and sender must be in a random encounter, but not be there for very long. There is a timer once you enter a random encounter, populated or not, and the Distress Call feature only works for a short time per encounter.

NOTE: Because Distress signal is considered a command, do not use Shift + Enter like for normal radio message. Use just Enter instead.

Message example: You type ".hHey can someone help me open this locker? Need someone with high Lockpick skill. Mine is only 52." (They see everything between the quotes except the leading .h and they see a dot on the map where you are, if they meet the criteria above.

You can use a radio to access your faction Base database. You have to be in your faction and use radio with your faction frequency, that can be checked/modified in it's faction terminal.

You can manually set a hotkey for a radio in your inventory and helmet:
Open your Reloaded.cfg and look for the [Bindings] section. Find lines with UseBind... - if you don't have any add them below Reload=R
Recognize the binds have increasing numbers, adapt these examples to your needs.
UseBind0=Alt R | 100
UseBind1=Alt H | 725 726 727 735 736 737 738 739 740 741
The first one opens a radio from your inventory when you press Alt+R.
The second one tries different types of helmets until it finds a helmet radio and opens it, when you press Alt+H.