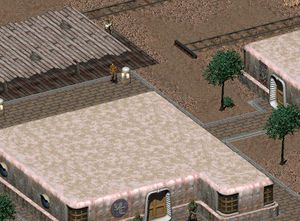 To expand their territory and influence, the New California Republic has begun to invest heavily in rebuilding pre-war rail infrastructure, since it is the most efficient way for them to traverse long distances across the desert. For the rebuilding of the rail lines, the NCR is using convicted criminals as Mantis the Ghoul can tell you in the NCR Train Station, guarded by police like Bob Jr. In FOnline: Reloaded, the only available train can be used to reach various areas in The World, without having to fear encounters of any kind of way.

NOTE: You can leave train at any point, in the same way you can leave regular group. Because it is a group led by conductor.

The train runs on a hybrid of steam engine and energy cells, while the main power is obtained out of micro fusion and small energy cells, because it's the easiest and most effective way. The steam engine isn't built into the train directly, but can be attached to it, in case the vehicle has to cross wide and less advanced areas.

On its way across the wasteland, the train stops at four stations. These are near San Francisco, Boneyard, NCR and Vault City that you can see on The World map.

You will visit all four stations during or after these Quests: