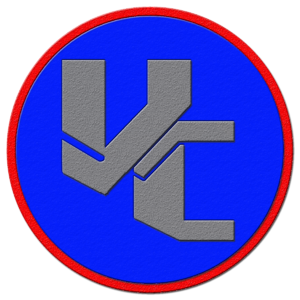 The emblem of Vault City.

Vault City is a high-tech settlement in West Nevada, established by the inhabitants of Vault 8 after the Great War. You can become a citizen, by joining the Vault City Faction.

Vault 8 opened in 2091 after receiving the all-clear signal. The origin of this signal remains unknown, but is likely the Enclave. The city was built around the Vault, using its fusion generator as a power source and knowledge contained in the G.E.C.K to establish the first structures.

The Council that rules the city, was established 2101 after the Vault Overseer retired.

Vault City is a very small but high-tech settlement. It is small compared to the hundreds of residents that live in Redding or Broken Hills.

Despite its size, the city boasts sophisticated technology. Apart from the NCR, Shi, Brotherhood of Steel, or the Enclave, they're the most advanced faction in the wasteland. They possess cutting edge medical technology, allowing them to mass produce medical supplies and Drugs, such as Stimpaks, as well as perform radiation removal treatments and sophisticated surgical procedures, including replacement of lost limbs and organs via cloning and grafting armor plating to one's skeleton. Aside from medical technology, they also control an advanced military force, with all guards and patrolmen rigorously trained and equipped with advanced gear including Sniper Rifles, Assault Rifles, Needler Pistols, and .223 Pistols and Combat Armor.

The city Council rules in a completely authoritarian way, controlling every aspect of life within the City. Their regulations are strict and enforced to the full extent of the law. For instance, no Drugs or real alcohol is legal in Vault City. Artificial imitations of alcoholic beverages are legal, but prostitution and Gambling or any other vices are not allowed within the inner city. All citizens found breaching any regulations are usually swiftly incarcerated and re-educated. Badmouthing the First Citizen will also warrant a swift and similar response. The population is strictly regulated, with all pregnancies scheduled and insemination performed by the Vault's autodoc.

Most of the Citizens are extremely bigoted, hypocritical and arrogant, treating outsiders like dirt and leading boring, conformist lives, content with the state of affairs. Although healthy and very well educated, they are also extremely dull and bland, with little to no concern for the outside world. Many do not even venture beyond the protective walls of the City proper.

The Vault City Guard secures the city from outside threats. While small, it is extremely well-trained, well-equipped, and supported by laser cannons. They are able to deal with any threats, except maybe an all-out military siege.

Vault City can be divided into three primary areas, plus a Train Station: 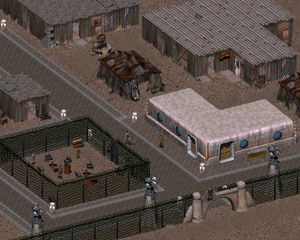 The outer entrance of Vault City

This area belongs to Vault City but most of the inhabitants there are no citizens themselves. Most of them are refugees and people who just settled here to take advantage of the protection the city offers. Some of them also try to do some business. There's a small general store, a doctor and a little bar. You may be greeted by Melinda and Steve.

Access is only by citizenship or with a Day Pass. In the inner city you can find many services, Merchants and special medical support. Also there are two bars but they only sell synthetic alcohol as the directive of Vault City forbids the consumption of real alcohol.

Maybe the most important buildings are the Council and the Headquarters of Vault City. The Council is the political institution of the city. It regulates all aspects of the everyday life of its citizens and determines the role which Vault City plays in foreign affairs. Within the Headquarters you can find the executive part of the city. It's the place where the guards are trained and military operations are planned.

NOTE: Players are not allowed to enter the room with an elevator and underground levels of the Headquarters. You will be shot on sight when entering. 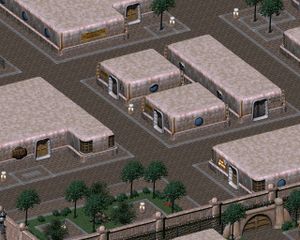 The entrance to the inner city of Vault City

Beside that there's the Corrections Center, led by Sergeant Stark, where citizens, who act against the law will be imprisoned, the Servant Allocation Center with Barkus, where citizens can buy servants for their own purposes and the Information Center, providing lectures of all kinds of scientific importance.

Citizenship Becoming a citizen of Vault City isn't easy. Normally you can only get the citizen status if you were born as one. But as most aspects of life have some little back doors, there's also one here.

You might try to go to the gate to the inner city and Talk to the guard to be able to join Vault City. If you meet requirements and are convincing enough, some of his conversation options allow you to immediately become a member of Vault City faction and thus gain a citizen status. In other cases he maybe will give you the opportunity to do some job for him. As exchange for that you will gain the status of a citizen with all privileges and consequences.

NOTE: Beware, this will automatically cancel your membership in a player faction, if you're in one. 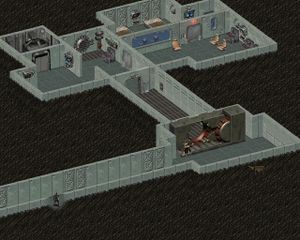 The entrance of Vault 8

Vault 8 was one of the Vaults that survived the Great War and the time after. For about 13 years the inhabitants of this small secure piece of earth lived there and hoped that finally some sign would alert them that they could go outside again and build up a new world. Finally, their sign came and the rest is history.

Nowadays the vault isn't frequented by people that much. Here you can find the main computer where you have access to all the information that was saved before and after the vault was opened, including data at their Medical Terminal, as this is also the medical headquarters of the city, led by Dr. Troy and his assistant.