Shoveling Poo is a good way to earn easy XP at Level 1, to get to Level 2, but after that it becomes a drag. It's also an easy way to get some early Caps.

If you want to shovel Brahmin Dung all you have to do is go to the Brahmin pens in any city and start using a Shovel on the excrement you see laying around. If you don't have a Shovel, you can ask the brahmin herdsman for one, they are usually around the brahmin pens.

With your Shovel equipped in slot 1, simply click on some Brahmin Dung to shovel it. If you click your shovel in "USE ON" mode, be sure that your target cursor is yellow and not red. Don't pick up excrement with your hands because you won't get paid for that.

For every pile of excrement you shovel, you'll get XP equal to 24 divided by your level (24/level) (rounded down) and a certain amount of Caps depending on the town where you shovel the poo (see below). So shoveling at Level 1 will get you to level 2 pretty fast.

To get paid for Shoveling Poo, talk with the Brahmin herdsman after working in a Brahmin pen. 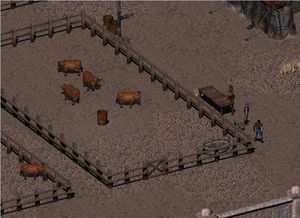 The NCR brahmin pens and herdsman.

There are brahmin pens in a lot of Towns. Here is a list of their locations: