Klamath is a small town built upon the post-war ruins of Klamath Falls, in Oregon. 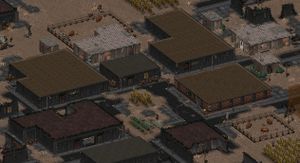 The main entrance of Klamath, where you can see the brahmin pen.

Klamath is far from the starting places in Reloaded, and does not have a train station. It does however have a guarded mine nearby, is part of the Town Control system, and is home to one of the more popular quests. This combination often makes Klamath a battleground, an exciting and deadly place where players should expect to find PvP combat anytime. Beginners should take care as this city is not safe! You may get killed easily.