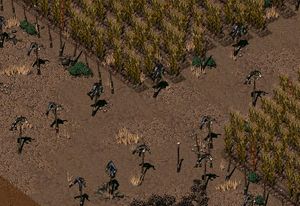 Ghost Farm's entrance, with fake corpses. At the north, in the field, is a ladder to go to the underground level.

The Ghost Farm is a small farm on the outskirts of Modoc, created by a group of pacific people, the Slags.

Led by Vegeir, the Slags at Ghost Farm are descendants of a group of soldiers that sealed themselves underground to protect themselves from radiation caused by the war. They are friendly, unlike most Slags found elsewhere.

Around the year 2238, they came up into the open-air and founded a small farm above their underground settlement where they had slowly mutated. Modoc inhabitants went there and found nobody, so one of them, Karl, decided to stay in the farm. To get rid of the intruders the Slags went in the farm at night, with their glowing ghouls, to make Karl thinking there were ghosts in the location. Karl quickly left to Den, and the slags made some fake corpses that they planted upon spikes to frighten the inhabitants of Modoc. 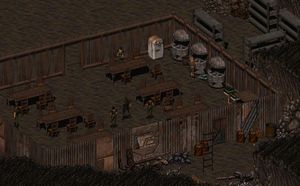 Ghost Farm's underground, with a workbench and some fancy ghouls.