From FOnline: Reloaded Wiki
(Redirected from Slavery)
Jump to navigation Jump to search

Slavery is a FOnline: Reloaded feature that allows you to capture NPCs and force them to help you. By then, they act pretty much like mercs. However, unlike mercs, your slaves can't handle a lot of weapons, and are less skilled. Besides this, you can sell your slaves to get caps, and set up a real slaver business. A good thing with mercs and slaves is they never try to escape.

You can trade (give) slaves to other players.

To Become a Slaver 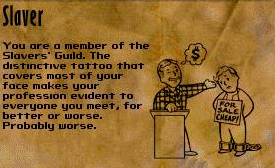 The slaver perk that you receive when you're marked as a slaver forever.

Being a slaver is the first requirement to be able to enslave people. Once you are a slaver, you'll be marked forever as one with a big, nice tattoo in the middle of your face. It has both advantages and drawbacks. Please note that if you don't have the slaver perk that Metzger can give you, you can't enslave people.

Just talk to Metzger, the Den's leader. He is in the top-eastern house in the town, surrounded by his guards. Ask him to tell you about his life and the place where he is located, and then, there you go! "I want to be a slaver." You'll get your Slaver Tattoo and a nice special perk that allows you to enslave, but makes you unable to forget you're a slaver. Useful, isn't it?

Requirements:
There is no level requirement for becoming a slaver, however you cannot become one with less than 4 Intelligence. Mentats can help you with this, though.

Important Note: Although the Good Natured Trait does not prevent you from becoming a Slaver, it does make Slavery useless since "Good Natured" prevents you from having any slaves.

Once you have enslaved people, and once they follow you, you can earn caps by selling them to notorious slavers :

Prices vary a lot, but the common female slave will be bought for 300 caps, and male for 400 caps while children are taken for 200 caps. On the side note - female Combat Slaves can be sold for 650 caps.

You also get +6 reputation with Slaver's Guild for every slave you sell.

Brahmin can be captured in the same way as a slave, but you do not need to be a slaver in order to tame a brahmin. Brahmin also do not have combat dialogue.