Raiders live in two bases across the wasteland. One is a cave in which their main hideout, a "really secret spot," is located. The other is just a small outpost in the south, for sometimes they have some operations to do in that area. 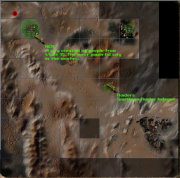 The southern Raiders' outpost near NCR. This is the first base that you will see before you complete the farmer's quest.

The Raiders' southern outpost is located near Vault 15 and is ruled by Jim Raynes. It is basically a small, not really secret, outpost where the newbies are sent to be tested. In this location you will do your first quest for the Raiders (killing Cooper). Only a few raiders stay here permanently to watch over the new members, gather supplies, or send messages to the main base.

Very similar to Fallout 1's Khans base, this outpost is only used as a small hideout: "If you've ever doing work in that area, then this is your safehouse", as Raynes tells you. He even adds: "Yeah, it's basically just a crash house for the boys if we hear about a juicy target from the Hub or Junktown. When there's nothing going on, the few of us that stay here all the time mostly terrorize homesteaders for what we need".

They might have some jobs to offer you there if you have joined the Raiders faction (Jobs not yet implemented in the game though). 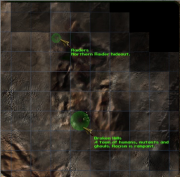 The northern Raiders' base near Broken Hills, where you can get all the levels of the Gunsmith (Small Guns) profession.

The main base of the raiders is the one you can encounter in Fallout 2. It has only one entrance, and you can go there only by completing the quest in the southern outpost first (See below). The outside part consists of small houses, tents and pens, where most of the raiders live and wander around. A small, heavily guarded entrance in a cliff leads you to the cave of the raiders, where they keep their supplies and their special Workbench with additional tools. This is also where the leaders stay so feel free to talk to them if you want. Here you can also resign from the Raiders faction. You can also trade there with a drug dealer and weapon/armor dealer.

You can bring ranger Dog Tags to Gomes. He is located outside of the cave entrance. For now, Dog Tags only give +4 Reputation each.

People to talk with at the main hideout, include: