Necropolis picture as seen in the original Fallout game.

Necropolis was built upon the ruins of Bakersfield. The town was the location of Vault 12, a vault that had to remain open regardless of the environmental conditions. Due to the heavy radiation, inhabitants are ghouls, descendants of those who attempted to protect themselves in Vault 12. To most of post-War California's residents, Necropolis was a haunted city, at times a myth used to frighten children, a "city of cannibals" inhabited by brain-eating ghouls. 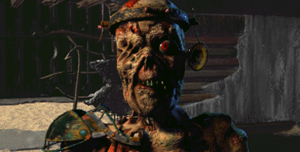 Set, the town leader. A man of faith.

A clever ghoul, Set, took control of the town in spring of 2084. In 2187, the Master learned the location of the town and sent a squad of Super Mutants to take control of Vault 12. The Master got furious when he saw the destroyed vault and told a detachment of his soldiers to stay in the town to ensure Set's cooperation in the upcoming war. Later, the super-mutants army attacked Necropolis and killed many of the ghouls, leading to a migration that would give birth to towns like Gecko and Broken Hills.

The town consists of three main areas: a destroyed Motel, a church in the Hall of the Dead, and Watershed. There are no brahmin pens, but Elmer has a message delivery job for you, and Krieger wants a case of Nuka-Cola. 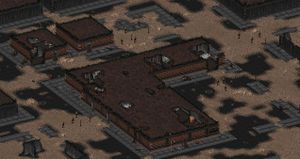 The main entrance of the city.