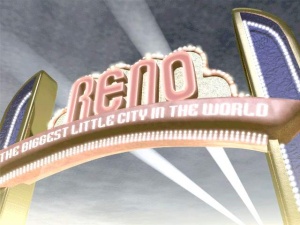 New Reno's main sign, existing in the pre-war life too !

New Reno is a gamblers town.

New Reno was built on the ashes of Reno, Nevada. The town was spared from the atomic fire during the war, but indeedly fell on the dark side of life... As law, rules and police had been banned by the atomic war, a few mobsters families struggled to get the power on that town, and are still struggling to get it. These families are the Wrights - the weakest family, mainly selling alcohol, and the only to know about Sierra Army Depot, the Mordinos - a family spreading Jet over the wasteland, knowing quite well the Raiders and owning the Desperados casino, the Salvatores - a family that sometimes secretly deals with the Enclave and runs the Salvatores Bar - and the Bishops, the second most powerful family in town, right after the Wrights, that own the Shark Club casino. Drugs, alcohol and prostitution made New Reno a dark, smelly and gambling town.

The main advantage of New Reno is that the town is located in the middle of The World. However, its main problem is that it's not a guarded town, so killing in Reno is quite easy. There are even campers that stay near the Exit Grids to shoot at anyone appearing, without taking any risk. The town may attract a lot of people, but as it is not a town that is part of the town control, large groups avoid it. Usually, you'll find there bluesuits achieving their quests, or small player killers. A few stores are opened in the city, like the Cat's Paw Brothel, the Golden Globes porn studios and the Jungle Gym boxing club.

You might lose a few caps in one of the town's casino. The Shark Club is ruled by the Bishops. 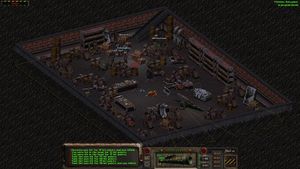 Commercial is a PvP zone that leads to New Reno Underground