Surgical Implants! A feature in FOnline: Reloaded that allows you to enhance your Damage Resistance, increase maximum Hit Points, and boost your character's SPECIAL stats. Each character can have no more than one of each SPECIAL implant, in addition to other implants that are often called "the combat implants".

NOTE: SPECIAL is still limited to 10 in each category, so trying to use an implant to boost Endurance, for example, on a Character that already has EN 10, will not work. 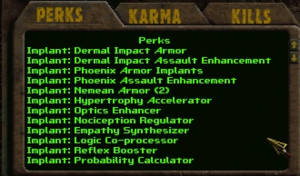 A picture showing some of the implants.

Dr Fung in San Francisco is able to perform implant operations. In order to do that (for each operation), he needs:

Only one surgery can be performed at a time, and is done via dialogue with Dr Fung. Any one character can have all implants installed. Implants are a permanent modification of the character and cannot be lost or transferred in any way.

NOTE: All of a Character's installed implants are lost when that Character is rerolled.