TC is a feature of the game that is only available to player-controlled factions, players who team up and join the same player base. It gives them the ability to take control of any of the six so called un-guarded towns in the north of the worldmap, giving them access to a special "TC Locker" found in each town. This container cannot be opened by anyone except a member of the controlling faction, and spawns useful items every half an hour (ex. 15:00 15:30 16:00) of real time. Caps are main loot, other are some drugs and/or crafting materials.

Characters that do not meet these requirements can certainly participate but will not be counted as part of the TC mechanics. They can, however, access the TC locker if the team gets the town.

A player near Marcus, Broken Hills leader. The countdown is visible to anyone in-game, and as it will soon reach zero, the Critical Failure Gang will be able to take its reward. 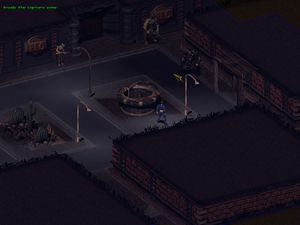 Town Control capture zone. Area highlighted by pressing F10 in which at least 5 gang members must stand in order to capture city.

To gain control in a town, you need to speak to the leader or chief of the town at the right time(Bring Mentats).If Militia is alive,first you have to get rid of them (Militia now respawns after a certan period of time instead of being bought). You must have at least 3 or 5 members present (depending on town) who meet the requirements above, to "impress" upon the leader that you are capable. Once you initiate TC, your TC timer countdown will be displayed globally, to all players. You need to hold ground for up to 15 minutes (high Speech can reduce this to 10 mins minimum, 1% of speech is 1 second less from 15 mins, reputation with town have little impact). To actually gain control you need at least 3 alive gang members for Klamath, Den, Modoc and Gecko, 5 alive gang members for Redding and Broken Hills, same as for starting timer. To see area which you need to hold press F10. If a member changes any ready item from TC-compliant to TC-non-compliant, the timer can end prematurely, forcing the team to start over. For example, if you're taking Den with only 3 guys, and one removes his armor to be funny, he will get a brief warning that he is not strong enough to support the team, and the TC timer will soon end. Or if he switches from a Pancor Jackhammer shotgun to a 9mm Mauser, same thing. In cases where the team is larger, such antics might not cause any problems because there's still enough members present who remain TC compliant. It's the smaller teams that must pay more attention to this. When the countdown timer has gone to 00:00, your faction will be shown in the Pip-Boy as controlling the town. (Press P twice, and click on "Statistics".) During the countdown, you can't access the reward container, and town preview is disabled for all.

Once you initiate TC, expect to be attacked. Teams and even loners will show up from all corners of the map just to get some action. PvP is a prime feature of any MMO and this is the harshest so players will drop everything they are doing when they see your TC timer and try to upset your effort. Your team needs to be ready with a plan, ammo, drugs, a well-spoken leader, Voice Chat like TeamSpeak, and proper character builds for all fighters. Additionally, each member needs safe places to park nearby to the towns, and a car with the right gear in its trunk. If you're new to TC, go to the town first and study the layout so you can plan some strategy. Expect to lose sometimes. How fast can your fighters return, re-gear, and jump back into the fight? Many fighters have Outdoorsman 150 with Pathfinder and Explorer perks so they can return more quickly.

'NEW! XP is now gained for killing enemy faction players during Town Control, and 50% of his lost XP is divided among all level 24+ players from killer's faction present, plus a 10% XP bonus for whomever was the killer!

Rewards are now being payed out every 30 minutes, in both caps and items per town. TC loot is cumulative so if nobody checks it, it just stacks up in the locker. Some of the items given out are unique for each town. Some towns will naturally be more attractive, as there's more valuable resources there. When a faction gains control over a city, the content that was already inside of the TC locker is deleted.

Your involvement in Town Control does not affect your reputation, but if your gang is hated in the town, you won't be able to control it. The same goes if you can't talk to the mayor, due to your extremely low reputation, or if you are a Slaver.

What faction controls which towns is shown in the Pip-Boy, but what also shows there is what factions have dominated which towns. The dominating faction of a town is the one that has guarded that town for the most amount of time, cumulatively in session. Every reward spawn adds one point to domination score. Domination doesn't give any additional profit; it's just a way to see more clearly who is winning the most in Town Control over the session lifetime.

To check your faction's domination influence points, type this command: ~influence These points change in 2 ways: