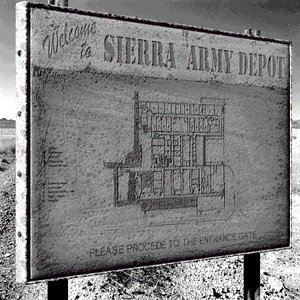 Welcome to Sierra Army Depot, the best place to be killed by security robots !

The Sierra Army Depot (S.A.D.) was built in 1942 as a storehouse but later became renovated into a research facility in the year 2050. After the war, only the robots survived there. Hidden in the desert above New Reno, it features four underground levels, guarded by powerful security robots. You'll also need to open energy doors in various places inside, by using Repair or Science skills. (Use skill on the door itself, or on the round vertical emitters at the doorways).

This place is still functional as a production facility if you get its power generator working temporarily, and route power to either the ammo station (for crafting tier 2 gear), or to the medical station (for tier 2 drug crafting). The ammunition area has a computer terminal that becomes a working Advanced Workbench if power is directed there. Or you can direct power to the medical station which has a computer terminal that becomes a working Medical Terminal. Fix the generator, access the main frame, and route power to the one where you want to do advanced crafting. Fight the robots along the way.

You can only see Sierra Army Depot on the map if you ask a Hermit for its location. Find a Hermit in the wasteland around New Reno. 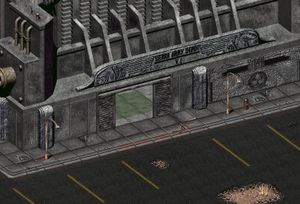 The entrance of the S.A.D. building itself, where you can access to the underground levels.

Eye Bots, Brain Bots, and Sentry Bots all wait in their recharging stations, which supply enough power to recharge and keep them ready. They guard the facility and attack when they sense movement. Watch for walls with hidden door sections, behind which are robots ready to attack. Bring a Motion Sensor to help spot them. As with any robots, they have low defense to EMP damage, so using shotguns loaded with 12 ga. EMP Shotgun Shells works well.

Usually the roof is covered unlike the other rooms, so it may be easy to miss. 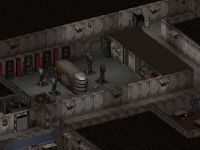 The computer is located to your left when you enter.

The largest room on the 3rd floor, located right next to the main elevators, houses the computer main frame. When you enter the room, to your left is a computer that you can access, if you've fixed the power generator. Check which area is currently supplied with power, and reroute power to the...

Choose one and the power generator might shut down and will need Repair to turn back on. If it works, you'll know when you check the right computer terminal in those areas - one of them will now function as an advanced crafting station.