The abandoned warehouse is inhabited by three deathclaws in the underground and eleven Slags on the top. The Slags and deathclaws respawn after 10 minutes.

It is currently used as a mini-dungeon and PvP ground. 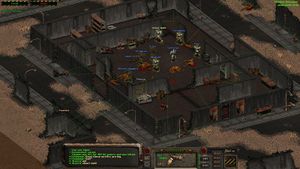 There is a chest which can be opened but all guards around it have to be killed first. In the basement there are also a few chests to loot - it demands also around 130 Lockpick.

The Warehouse is located in the LA Boneyard area south of Hub, in zone 30:45 (the same zone as the Gun Runners).