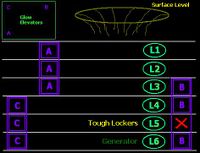 Glow is a PvP location with full loot-drop. The Glow, known before the war as the West Tek Research Facility, was founded in 2002 and is located in southern California. It was a facility dedicated to making advanced weapons and biomedical sciences research. Its scientists made, for example, the first Power Armor and the first version of the Forced Evolutionary Virus (FEV) before the virus was moved to the Mariposa Military Base.

During the Great War a nuclear missile exploded on the facility's surface, resulting in the destruction of the FEV containment tanks, releasing the virus into the atmosphere. This turned the whole area into one of the most irradiated locations in California.

Haunted by security robots and deadly due to radiation, this location in FOnline: Reloaded is pretty dangerous for lone travelers. It contains six underground levels that you can access using some old elevators. Rumors say that on the mysterious level 5 you can find pre-war weapons, ammunition and armor.

The Glow is located at zone 38:51 (south east area), and might be the most southerly permanent site in the game world.