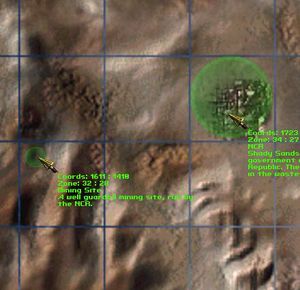 The NCR Mine's location on world map. As you can see, it's really public.

There are several mines throughout the world near major cities and characters can go there to mine the resources they will need to craft items. Each mine contains resource veins among the rocks and in some of the walls. Each vein holds a number of resources of specific type. When a vein is depleted, another vein in the mine is generated. The type of a new vein is in most cases random, although the chance for each type vary, depending on mine. The only exception is if it was the last vein of a type, in such case another vein with the same type is generated.

There are three types of mines:

Some mines are guarded by people (NPCs) from the nearest town. The guards there will engage you in combat if you get involved in any fighting at the mine. Guarded mines have only basic Minerals and Iron Ore. Each guarded mine has many resource veins in random locations. When someone depletes a vein, a new vein is generated immediately afterward in a random place at that mining site. 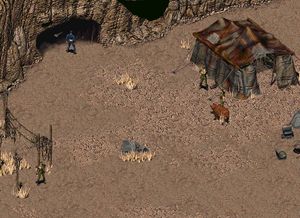 These are the resources you can mine safely, in guarded mines:

The following list includes the location of all the game's guarded mines:

Slaves are allowed in public mines, but are not recommended left unprotected by the owners; There are many players who love nothing more than to find a slave in a public mine, kill them, and loot them.

Unguarded mines are more valuable to Miners because they contain high quality materials as well as the basics, but they are more dangerous because PvP combat is not restricted. Unguarded mines also have hostile critters that attack you while you mine. There are no NPC guards and it's only on the player himself to avoid death. Carrying a weapon or having a buddy to protect you is not a bad idea at all. Unguarded mines in Redding, Broken Hills and near Gecko are no-logout (your character won't disappear if you logoff there). Each unguarded mine has 10 resource veins in random locations. When someone depletes a vein, a new vein is generated immediately afterward in a random place at that mining site. 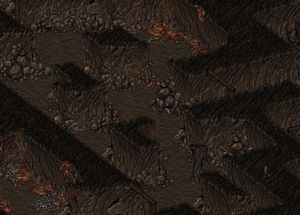 The Redding Mine's entrance, guarded by... hum, nobody.

These are the resources you can mine in more dangerous, unguarded mines:

These are the world's premium unguarded mines:

Slaves are allowed in unguarded public mines, but can't be left alone; they will get killed one way or another.

These can be purchased from the resident Mine Overseer, at each of the Guarded mines in the game world. The Overseer will charge you 40k Caps for directions to the location. A character can own only one private mine at a time. Private mines do not spawn Uranium Ore or Gold, only normal and high quality Iron Ore and Minerals. The resources available inside private mines will be refreshed after time, but the mine will last for only one real-time week, after which resources will cease to regenerate and a notice will display upon entering that says the mine has been depleted. The mine will still exist after depletion until another mine is purchased. Purchasing a new mine will erase the location of the old one.

NOTE: Private mines is a misnomer since they are public locations, seen by everyone. Hence, other players can go there and kill your workers and rob the location.

A very efficient way to get resources from mines is to use slavery.

Warning: Never log off on the mine map, your slaves will run away. Log off somewhere else or on the worldmap.

A pathing error will stop your slave from mining until fixed by moving the slave to a different spot and giving them orders again.

To minimize the potential for pathing issues, it helps if slaves are as far away from each other as possible. It also helps if you first order them to stay put, then order them to collect resources. Finally, having more than two slaves increases the chance of pathing issues. 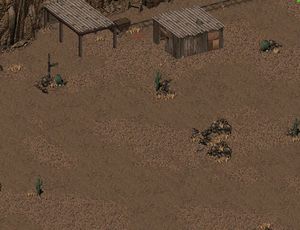 The entrance to your personal mine.

Private Mines allows You to dig following resources, but in much less quantity then in Unguarded Mines. 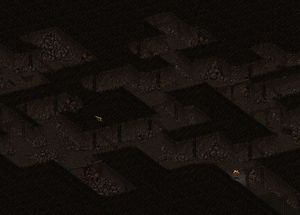 Listed here are the locations where private mines can be purchased. Go to a building at the mine and talk to a guy about buying a mine location:

Private mines spawn in the north near Redding and Klamath.

Private mine is visible to the public. The mine can be shared by simply taking someone there.

Alternatively, you can command your slaves to mine for you, and strangely, they don't need any tools for that. This might not work in every mine. Read these tips first.