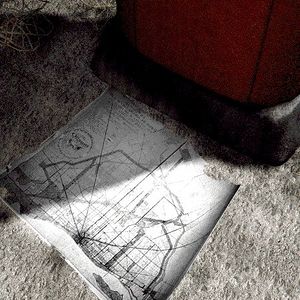 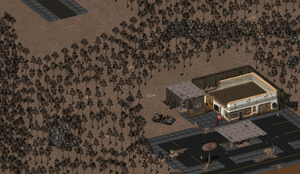 Navarro's main entrance, a totally normal gas station. Well, if we can say a guy wearing a pink robe is normal, of course.

In the pre-war period, Navarro served as a Poseidon Oil refinery for the Oil Rig, where the Enclave headquarters is located. Near their refinery was built a secret military base with a satellite, a maintenance and repair facility. After the Great War, Navarro became the main base of the Enclave in California, the main refueling station for the Vertibirds. To hide the Enclave's operations at Navarro, they have utilized the old service station as cover. An Enclave agent referring to himself as "Old Chris" keeps watch outside the gates and claims to be the proprietor of the gas station turning any wanderers away as well as guarding an entrance to the underground section of the base via a manhole.

The base is located in two parts. In the open air is the cantina, the Vertibird's refueling area, and the scientists and technicians place to work. In the underground is stored the Enclave's items and the base commander and main scientists.

The heavily guarded base